Five Things to Know Before You Bike From Telluride to Moab

Written by Ashely Korenblat on November 17, 2016. Posted in blog.

Telluride and Moab are two of the most charming destinations in the West. Destinations for adventurers, historians, and families alike, you’ve likely heard of them. Western Spirit’s ride from Telluride to Moab is one of our favorites. Here are five things to know before you go.

This is the perfect first off-road adventure

This ride is challenging, but not too technical, making it ideal for the road cycling enthusiast who is ready to try some dirt-road riding. If you’ve never ridden on fat tires and dirt before, prepare for an exhilarating experience, away from cars and the noise of other people as you roll through the beautiful landscape between these two adventure hotspots.

The terrain is challenging but accessible

Short climbs are intense, but allow time for recovery. This trip is awesome for pushing yourself with plenty of support from your guides and your fellow cyclists. The days are long, and altitude is a factor, so we recommend plenty of cardiovascular training before the trip. Just keep in mind that you won’t need technically advanced mountain biking skills.

The weather is predictably variable

The weather is typically sunny and dry, but the temperature can change quickly, and when storms come in they come with a vengeance. Packable layers are a must for this ride that spans from aspen forests to sagebrush deserts. When the sun goes down in the desert, it gets chilly! So bring warm layers for night time, and plenty of breathable, sweat-wicking clothes for daytime riding.  Here’s a list of our recommended gear for desert riding.

Okay. This one is obvious, but we mean it. The scenery on this ride is unparalleled and will make you look like a pro photographer—even if you’re just using the camera on your iPhone. The trip begins in the Colorado Rockies and crosses the Uncompahgre Plateau. Telluride’s wildflowers are incredible in the early summer and the yellow Aspens will take your breath away in the fall. As you ride down from the mountains into the desert, panoramic views will follow you the whole way. Plateaus give way to canyons as you get closer to Moab, completing the eclectic sample of western landscape.

Have I mentioned that this is one of our favorite trips? That it is the best way to see the American West? That it’s a great way to bond with family and old friends, or to make a great group of new friends? If you’re on the fence about a mountain bike adventure, give us a call and we’ll answer any lingering questions. I have no doubt that you’ll have the time of your life.

Full details about this trip and many more are available at westernspirit.com or call us to talk cycling at 435-201-6310. Check out some stories and testimonials from riders past, and then get out there and start training!

Our Five Favorite Views Around Telluride

Written by Mark Sevenoff on November 3, 2016. Posted in blog.

We have a couple of great trips involving the amazing town of Telluride, Colorado: Telluride to Durango and Telluride to Moab. What makes this town such a favorite among road and mountain bikers, travelers, socializers, and artists? Among other things, the views. Here are some of our favorites.

The view of the Mt. Sneffels wilderness area on the way out of the town is dramatic, to say the least. Each season offers a different color palate to highlight the contours of the stunning mountain ridges. Wildflowers, fall colors, and even snow adorn the landscape elegantly. This view provides a great start to Western Spirit’s Telluride to Moab trip. There are great hiking trails up to the summit and along the ridge too, for visitors looking to get up above town on foot.

This 365-foot cascade is the tallest waterfall in Colorado, located just a few miles outside of the town. Hiking trails provide the best view of the falls and the historic hydroelectric power plant that sits at the top. For a while, the falls were a well-known and very challenging ice-climbing destination, but now climbing is prohibited and we recommend just enjoying the view.

The view from the top of Telluride ski resort provides the perfect multi-faceted view of a modern mountain town. You can hike or ride the gondola up and look down at the streets nestled in the box canyon. The man-made structures seem so tiny and insignificant compared to the breathtaking mountains that stretch across the horizon in all directions. This is one of my favorite views to put everything in perspective—either in life, or just when planning out your hikes and bike rides for the next few days.

Far away from city light pollution, Telluride is an amazing place to look up at the night sky. From a hammock, through a tent skylight, or simply from laying on the ground, you can’t beat an evening of stargazing after a long day of cycling. The alpine meadow at the top of the Galloping Goose railroad grade is one of my favorite spots to lay down and look up. We camp there on the first night of our trip from Telluride to Durango.

The town’s main drag is a colorful display of Victorian architecture that looks great against the mountain backdrop. Historic sites and stories line the street, with signs of the rich mining history, the more recent establishment of the ski industry and outdoor adventure travel, and the subsequent cultural ripening. Art galleries, boutiques, world-class restaurants, and spas provide plenty of activities for your days off from the trails.

While our trips around here are more on the difficult side, we recommend checking out the town and then working your way up with some of our easier trips first! Give us a call if we can help you make your plan. 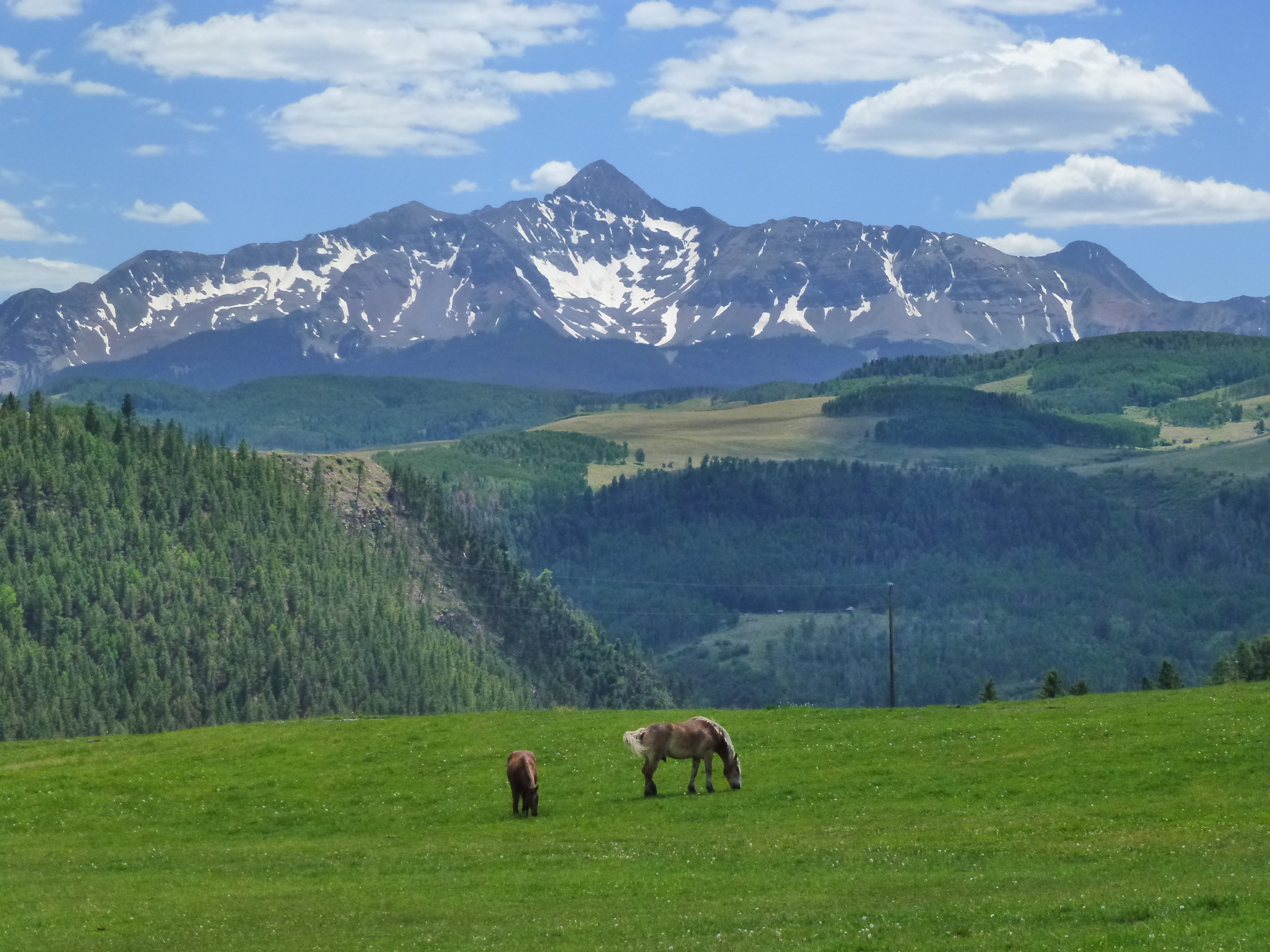 All About Telluride Hiking

Written by Ashely Korenblat on September 22, 2016. Posted in blog.

Telluride, Colorado is a town like no other, surrounded by peak after peak of amazing mountains with endless terrain to explore. Hiking is surely the most popular activity in the summer, and there’s plenty of great cycling as well. Here’s what you need to know about hiking in Telluride.

Allow for Plenty of Time

There are over 90 different hiking trails in the immediate vicinity of town, so if you are visiting from out of town, make sure you stay a little longer than you think you should. There are also tons of attractions to visit, from restaurants and shops to museums, and all kinds of special events like the Telluride Film Festival and Telluride Blues & Brews music festival.

Keep an Eye on the Weather

Telluride is situated at the mouth of a box canyon, which can make for some sudden changes in weather patterns. In the late summer, afternoon thunderstorms are common, so be sure the sky is clear before you get too far above tree line.

Telluride hikes span a wide range of difficulty, from meandering trails through town to gnarly climbs up 14,000 foot peaks, known familiarly as “fourteeners.” Know your hiking group’s ability level and intention when selecting your hike. It is also a great area to put together a multi-day hiking and camping trip, similar to the ones we lead on bikes. You’ll need to pack in and pack out your own provisions in this case, of course. Here’s a basic map of the trails close to town. Keep in mind that the town of Telluride is at 8,750 feet above sea level, so if you’re coming from lower elevation you will feel the difference!

Rest assured that whatever type of hike you’re looking for, it exists in Telluride. Bridal Veil Falls is definitely one of our favorites. It’s the tallest free-falling waterfall in Colorado, and it’s a short hike from town. This is a fairly accessible hike, suitable for active families. If you’re looking for a challenge, Mt. Sneffels is said to be one of Colorado’s most beautiful mountains. The hike to the summit is short and steep, requiring a bit of class 3 climbing, but the views on the way up are absolutely stunning.

We love multi-faceted adventures. If you do too, start off with a few days hiking in Telluride, and then join Western Spirit for a point-to-point ride to Durango or Moab! Give us a call and we’ll break down the details. 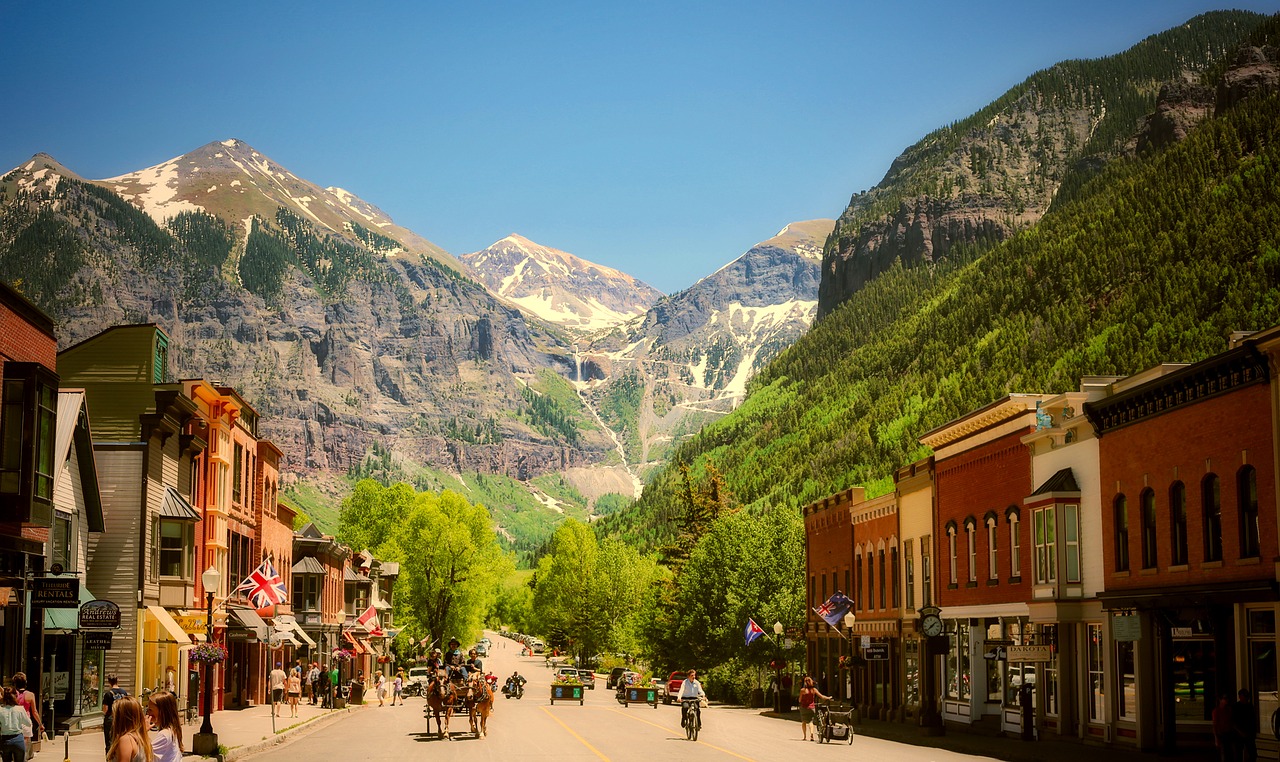 Why Telluride is The New Aspen

Written by Mark Sevenoff on September 8, 2016. Posted in blog.

Aspen is a legendary, Rocky Mountain town, famous for its skiing, hiking, art, and distinct culture. But have you heard about Telluride, it’s slightly more secluded, just as epic cousin? Here are a few reasons why we think Telluride is the new Aspen.

The two cities have similar origins. Both were first inhabited by the Ute tribe, who hunted the land every summer. White settlers made their way into the valleys around 1870, in search of silver. The towns grew over the next twenty years or so, until the price of silver fell and populations dwindled into the early twentieth century. The terrain surrounding both towns makes it easy to imagine yourself venturing over mountain passages in search of wild game, and old mining structures keep memories of the silver age alive. These remnants of the past make significant contributions to the old-west feel of both Aspen and Telluride.

After the boom and bust years of mining, it was “white gold” (snow) that finally started to bring people back into the two towns. In both cases, enterprising businessmen established ski resorts on some epic terrain, bringing adventure seekers back into town. It’s pretty safe to say that if someone lives in Telluride or Aspen, someone in their recent lineage was into doing challenging and fun things outside. This makes for an adrenaline-fed culture with plenty of outdoor adventure companions. When the snow melts, of course, many skiers take to their bikes, and ski trails often make for great mountain bike rides.

Aspen Skiing Corporation was founded in 1946, and soon after became recognized as a premier international ski resort. Along with skiing came people from all over the world, which prompted the growth of businesses, restaurants, and boutiques, all with a very unique “wild west” appeal. The ski bums of the 60s and 70s stuck around to become the entrepreneurs of the 80s and 90s, and now Aspen is a full-on resort town. The natural beauty remains, but it’s not such a secret anymore. What used to be an escape from the bustle of everyday life has grown into somewhat of a mountain metropolis. There are still some great gems to discover, a bit out of town, and in the off-season. But personally, we’re a little more excited about Telluride these days.

The Telluride Ski Resort got started about 25 years after Aspen, so it hasn’t had as much time to be discovered. Today, Telluride’s population is still only about 2,000 residents (compared to Aspen’s 6,500 or so). But with similar geography, the culture of the place is similar to the culture that made Aspen famous. In addition to its fantastic outdoor appeal, Telluride is well-known for its Film Festival, Jazz Festival, Blues & Brews, Bluegrass Festival, and lots of newer festivals centered around things like wine and yoga. It’s an amazing destination with plenty of old western charm.

Check out Telluride the Western Spirit way—through the surrounding San Juan mountains on a journey to Durango, or out into Utah to our home in Moab. Call us today to start planning your trip!

Thank you for subscribing.  We look forward to riding with you!

What We Stand For
Our Story
Our Guides
Our Sponsors
Blog

Get inspired and join thousands of other cyclists!

Subscribe to our newsletter and learn about the top bike adventures in North America.  We promise not to share or sell your information, ever.

You have Successfully Subscribed!