Public Lands: It’s All Yours – Part 1

Why you need to know about public land: As mountain bikers, we are dependent on public lands. Through my career in bike manufacturing, racing, and as an outfitter I have had the opportunity to ride on trails of every description on public lands of every type.

Today there are increasing pressures on our public lands from all directions, so we here at Western Spirit thought it would be useful to use our blog as quick and easy place for mountain bikers to get informed on public land issues that are likely to effect the trails you love.

Land ownership through the ages: The first land owner was probably someone from a nomadic tribe that accidentally planted a seed and decided to stick around to watch it grow. Or maybe it was someone who found some type of ore coming out of the ground and figured he could trade it for food. For most of human history, land ownership has been the best way to generate wealth to take care of yourself and your family.

The Homestead Act of 1862 encouraged immigrants to head west and claim some land. Lots of land did get claimed but quite a bit didn’t. Why not—nobody wanted to live there. In most cases the problem would have been lack of water, but in other place the topography itself just wasn’t very hospitable.

Thus more by accident than by design Americans ended up owning large sections of public land, primarily in Western States. These lands are in three major categories: National Parks—the jewels of the program, National Forests, and Bureau of Land Management Lands. And in all three there are places that are considered: front-country—near roads, near towns and easily accessible; and backcountry—which are further away, usually you need to camp out there. In general more skills and experience are needed to reach backcountry places. 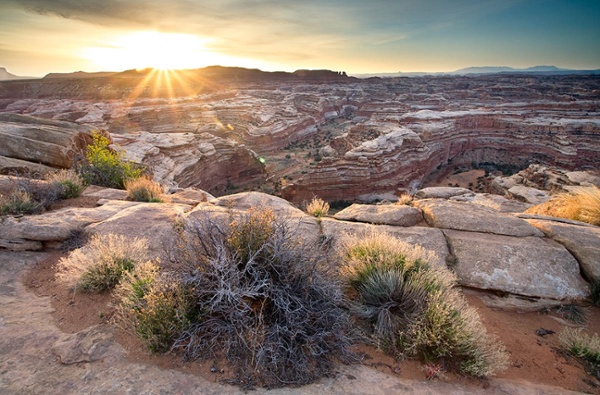 National Parks are the most unique and special places in the country and are also often historic locations. Front country lands within National Parks include visitor centers and short hikes to points of interest. Backcounty areas in National Parks are often sensitive landscapes where visitation is limited by a permit system. The good thing about a permit system is that when you do get out there, you have the place all to yourself! Like we do on the White Rim Trail in Canyonlands National Park. National Parks are managed by the Department of Interior. Congressman Ryan Zinke from Montana was just appointed Secretary of the Interior and while we don’t know if he mountain bikes—he does hunt and fish so we are hopeful!

The Bureau of Land Management (BLM) is also managed by the Department of Interior. These lands include all kind of incredible deserts and canyons and are primarily designated for multiple use. That means oil and gas, grazing, and mining, as well as motorized and non-motorized recreation. In recent years, recreation on BLM lands has grown exponentially, partly due to strong partnerships between local BLM Managers, local mountain bike groups, and the International Mountain Bicycling Association, IMBA. But conflicts between recreation and resource extraction like oil and gas and mining are starting to pop up around the country. Because oil and gas operators pay for leases on these lands, they have more rights than we do. We are making progress zoning some lands for recreation through the land planning process as business owners and trail users get involved, but when we don’t show up, resource extraction usually wins the day. More on this in future blogs.

National Forests are managed by the Department of Agriculture, primarily because much of the original focus was on harvesting trees. Today there are lots of trails on forest service lands and in some places near ski areas or other resorts ‘the trees are worth more standing up than they would be lying down.’ Timber management remains the focus of the Forest Service, but the Outdoor Industry Association along with other groups have recently launched a process for improving recreation management on Forest Service lands and this program is progressing.

These are the major categories of federal land managers. These lands are owned by you. Its all yours!! Next week Wilderness and National Monuments demystified!

Public Lands: It’s All Yours – Part 2

In Part 1 of our public land series we clarified the three major federal land managers: US Forest Service, Bureau of Land Management, and National Park Service. All three of these land management agencies manage different types of lands within their jurisdictions. In the forest and on the BLM most of their lands are usually open to multiple uses—that means they are available for harvesting trees, grazing cows, mining, and/or recreation of all types. But both agencies and the park service also have lands that are special for one reason or another.

Lands can achieve special status for many reasons: perhaps they are critical wildlife habitat, or they may have some special recreation status like a reservoir or motorized recreation area—in which case they many have a special name, a special color on the map, and special rules for visitors. Many of these special designations can be made by the agency itself through planning processes that include public input. But the two most special designations: National Monuments and Federally Designated Wilderness Areas are made by the president in the case of national monuments and by the Congress in the case of Wilderness.

The Wilderness Act of 1964 was the first time we as a species decided to put the needs of nature above the needs of man. Until this time, and for all of human history, the earth was here for us to use. By the early 1960s the pace of development around the globe became a concern and many people began to think that it would be wise to leave some portions of the planet in their natural state, thus the Wilderness Act of 1964 was born. The act itself is fairly simple in that the goal is to leave areas designated as wilderness ‘untrammeled by man.

Since the mountain bike was not invented in 1964, there is no specific mention of bicycles in the act. But the act does clearly state that mechanized transport is prohibited. Horses however were allowed continued access, partly because they are animals, partly because it was a historic use, and partly because the act would never have passed if horses had been excluded. Every act that congress has ever passed has includes compromises.

Many people have tried to slice and dice the wording to find a way to allow mountain bikes in Wilderness Areas but none have succeeded. Instead many bike advocates have worked with wilderness advocates to sort out Wilderness boundaries in a way that keeps established and legal bike trails open. With one exception, none of the Wilderness bills passed since 2009 have closed bike trails.

This is one of the important distinctions between Wilderness designations and national monuments. When a Wilderness bill is proposed by a congressman to designate either BLM or Forest Service land as Wilderness, the process is long and detailed and the public is part of the process at every step. The public can see drafts of the bill, they can submit testimony at the hearing, and they can lobby members of congress to vote for or against the bill.

National monuments go through a process that goes through the executive branch rather than the legislative branch, and in some ways is the opposite because the public input come primarily after the designation has been made. The president was given the power to unilaterally issue a proclamation designating a piece of public land as a national monument by Congress when it passed the Antiquities Act. The purpose of this act is to protect places of historic or cultural significance. Many of our national parks started as national monuments. At first the locals were angry because they found themselves losing the right to use these lands for grazing or mining or other traditional ways to make a living. But over the years most (but not all) residents have come to appreciate their national parks.

Today, many people who live near public lands may agree that a particular place deserves a higher level of protection, but they would prefer achieving that protection using legislation—a bill in Congress that would include their input and ideas as it was developed. The national monument designation rankles some residents because the proclamation process does not officially include public input.

However—and there are two ‘howevers’ involved here. The national monument process DOES include public input in the management plan that is developed to sort out exactly how the new monument will be managed. In this process, many of the same types of decisions that are made about Wilderness boundaries and other public land designations, that are part of public land legislation, are addressed in the monument management plan and the public is involved.

The second ‘however’ involves gridlock in Congress that prevents any legislation from passing. In many cases locals have been working on public land bills that would designate some Wilderness and perhaps create some other designations, but Congress has failed to pass these locally supported bills. In those cases, the public had had no choice but to by pass Congress and ask the president to act unilaterally to implement the protections they have agreed upon via a national monument designation.

Whether these special designations are achieved via a public lands Wilderness bill or a presidential national monument proclamation—there are still people that think any increased protections are a bad idea. The current thinking of the Trump administration is that all regulation prohibits economic growth, and many of the recent updates in land management and environmental protections have already been rolled back. There are many ways that these changes could affect a mountain bike trail near you, but before we head down that dark path, our next post will be about communities that are prospering precisely because they have access to protected public lands.